The process of creating a backup is a way of preventing all the chances of data loss. It is important to create a backup first when handling crucial data, so that if in case some data loss occurs the user can restore it from the backup files. Not only for crucial files but there is a requirement of backup data files for every kind of data that the user would require later. In most cases, when restoring the backup, errors occurred saying: “The backup file contains Unrecognized data and cannot be used.” Now when we know the merits of backup BKF files, how to install Window XP Backup to Windows 7, 8, 8.1, 10. Let’s have a look at it.

How to Take Windows NTBackup

The user can create their backup by downloading & using the Windows XP Backup Utility which is already present in the Windows XP. Open it and create XP Backup of the data you want. If you are not using Windows XP (which is the most common case), what to do? You may think of using win XP Backup utility present in Windows XP and then restore Window XP Backup to your current Windows version. This may sound very easy but leads to Windows Backup error “the backup data file contains unknown data and cannot be used”.

If the user tries to backup files that are created in Windows XP using NTBackup Utility in Windows 7, 8, 8.1, 10 (later versions), they will get the error saying “The backup files contains unknown data and cannot be used”. This happens because Window XP backup utility not found in the higher versions than Windows XP.

As NTBackup facility was removed from the higher versions Microsoft created nt5backup.cab utility for them. The easiest solution to restore Window XP backup to Windows 7, 8, etc. and solve this Windows Backup error “the backup file contains unrecognized data and can’t be used” is to download NTBackup utility in your Windows 7, 8, 8.1, 10 whichever you are using and then creating a backup of the files you wish to have.

This NT Backup Utility would contain 2 dll files which play an important role to create a backup of files & restore Window XP backup to Windows 7, 8, 8.1, 10. The names of the files are mentioned below-

Download the NTBackup Utility named “nt5backup.cab”, which is a rar file that restores your Window XP Backup to Window 7, 8, etc.

Step 1: Download & extract the nt5backup.cab file, make sure that it contains 3 files: 2 dll files and ntbackup.exe 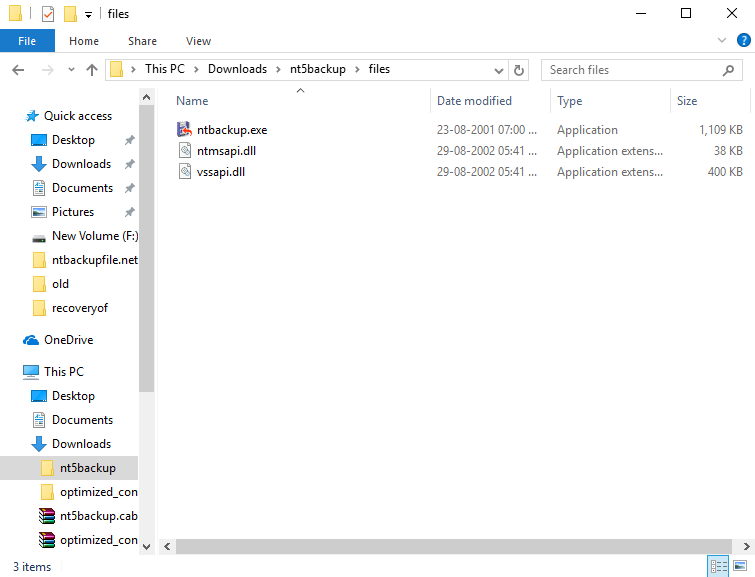 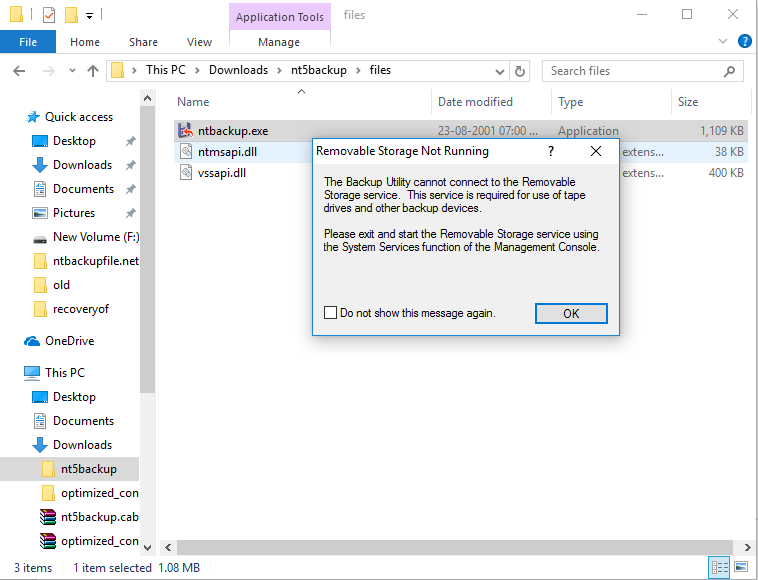 Step 3: A welcome screen appears which has a feature Advanced Mode, you can opt for it if you want. After that click next. 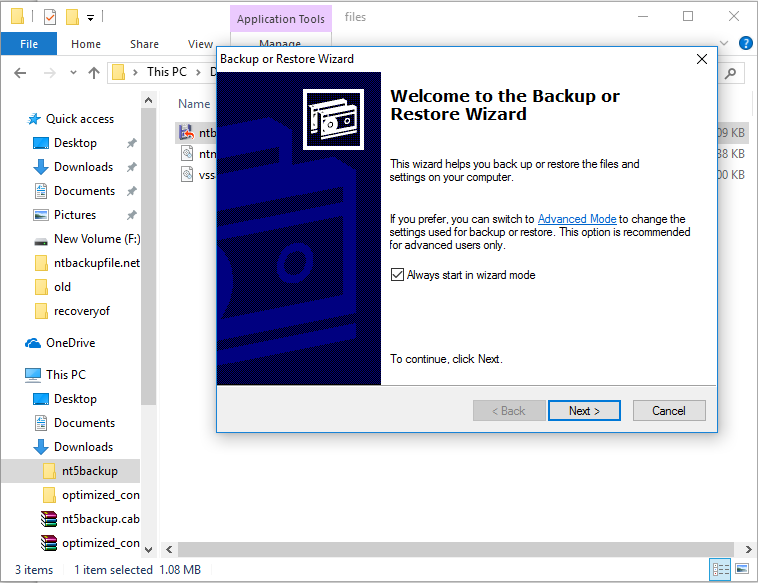 Step 4: Now select the option which you want the tool to perform. If you want to backup then select the Backup Wizard & if you want to restore your BKF file then, go to Restore and Manage Media option. 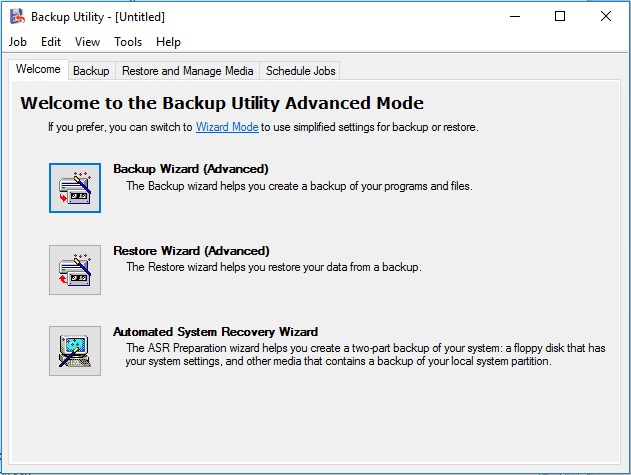 Step 5: A screen appears which has many options, select the location to store your backup files. 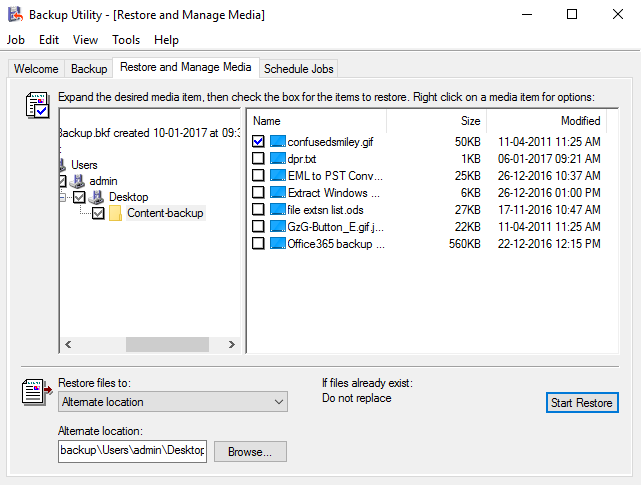 Step 7: When you are done selecting the files. Click on Start Restore button. Confirm the pop-up window. 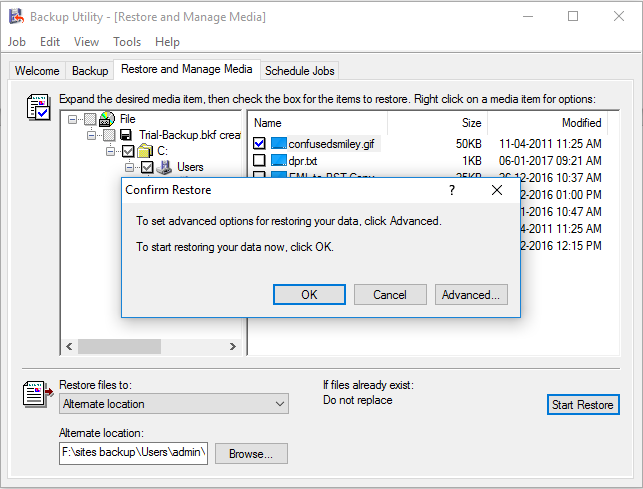 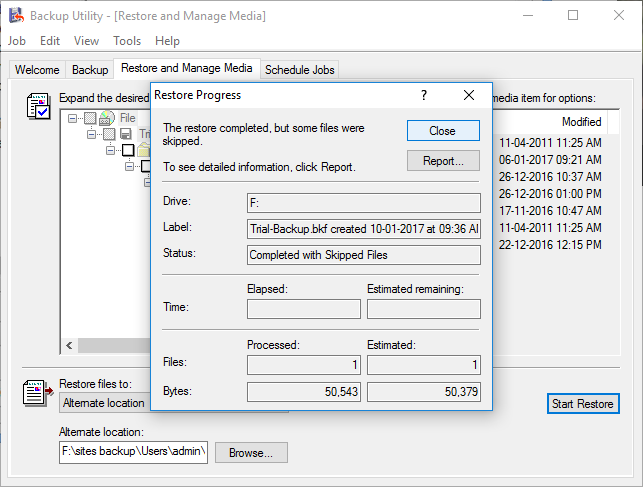 If you keep getting the error “the backup BKF files contains unrecognized data and cannot be used” error when restoring the backup from Windows XP, then it is clear that your BKF file is corrupt. The NTBackup tool cannot recover a damaged backup data file. In such a situation, you can use Datahelp BKF Repair Tool which can repair damaged Windows BKF files. It provides an effective solution to restore backup files, and it is also helpful in removing corruption from these files. Even when the backup facility is removed from the later version of Windows this NTBackup Utility works wonders in creating backups and restoring the backup file contains Unrecognized data and cannot be used. Here we have summed up the solution for the most common error which the user will face while restoring their Window XP Backup to Windows 7, 8, 8.1, 10.  Also the process of creating and restoring the backup in the higher versions of Windows. The situations where the BKF file which is to be restored is corrupted then it is not possible for the NTBackup Utility to restore Window XP Backup to Windows 7, 8, 8.1,10. In such cases, the user would require a BKF Recovery tool, which would first recover the BKF file and remove all the corruption. After that, it will restore the Window XP files to other versions of Windows.

Error 3253 Connection to The Server Failed or was Dropped – SolvedHow to Fix Error “Cannot Start Microsoft Outlook, Cannot Open The Outlook Window”How to Conquer From “An unknown error has occurred in Mac Outlook 17199” ErrorKnow All About the Lotus Notes Names.nsf FileWays to Fix Outlook Error 0x800ccc0f – Verified Solution